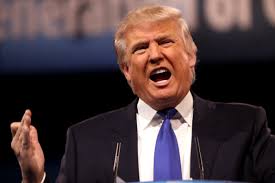 So, Tuesday night after the Super Tuesday elections, Mr. Trump once again held a press conference and used the opportunity, among his glib promises of making America great again (how many of you knew he hijacked that from Ronald Reagan’s campaign in 1980?), to cast back-handed insults at his opponents. I will admit I only watched about the first ten minutes or so of the press conference. I was looking for the context of the quote I read, so I could be sure it wasn’t simply someone misinterpreting something he said. I do my best to always do that, though I will admit that gets harder in these days where all the candidates, but particularly Mr. Trump, say a thousand things a day that someone has an opinion on. This one caught my attention for a reason though, aside from the fact that the last piece I wrote dealt specifically with abortion. Mr. Trump, standing on stage in front of ten flags and a Governor Christi that looked like he’d been chewing lemons all night, once again praised the good work that Planned Parenthood does for women.

After uttering his proclamation of what a good organization the biggest baby butcher in the nation is, if only they would get rid of that pesky abortion thing, he acknowledged that that is maybe not a perfectly conservative position, according to so-called conservatives. And went on to assert that he’s still more conservative than anyone else on a whole host of issues from the military to veterans and the wall. You know, the big, beautiful one that Mexico will thank us for letting them pay for. It was that term that caught my attention, amidst all the repetitive superlatives. So-called. I really don’t like that term in general. I try to avoid it, much as I avoid terms like RINO and CINO, and all the other labels we slap on people to separate them into an us versus them camp.

I had to ponder tonight why those terms bother me. I get where they are coming from, words have meaning. And Republican, Christian, Conservative, etc. all denote a specific affiliation, set of ideas, and beliefs. They are defined. And when people claim them without demonstrating those affiliations, ideas or beliefs, the members of those particular associations, rightly, seek to call out the subterfuge. But unlike Christian, which criteria are laid out in God’s Word and therefore cannot be defined or redefined by us, most other labels are a little subjective. And over the years in politics, those “so-called” shorthand alternatives have simply come to mean anyone we disagree with on an issue.

Combine this with the soundbite mentality of the age, and our absolute political ADD (seriously, did you know Reagan was the first one to use Make America Great Again?) leaves us prone to allowing our political language to be so diluted and corrupted that it becomes hard to argue when someone like Mr. Trump self-identifies as a conservative. I mean, after all, Bruce Jenner has self-identified as Caitlyn Genner, and we are all supposed to assume it was perfectly normal to give him woman of the year. Rachel Dolezal self-identifies as black, and no one was supposed to be mad that a white woman became the spokesperson for an NAACP chapter. Elizabeth Warren self-identified as Indian, and we weren’t supposed to make fun of her war cry against the misogynistic oppression of Scott Brown.

So, tonight, in an effort to lay claim to our sanity, or at least remind us of the common definition of the language we use. First, from the most wonderful, I mean really beautiful, totally magnificent definition site, dictionary.com:

6. having the power or tendency to conserveor preserve.

Yeah, I know. Not very specific. Especially when someone self-identifies and we don’t want to contradict people’s identities. That just wouldn’t be nice. Though, we could say he’s not terribly concerned, at least for his current purposes, in preserving existing conditions. Nor, once you get to listening to what he wants to do, does one get the sense he is seeking to restore. And he certainly doesn’t fit the bill for definition number 3. Then again, I’ll be honest, neither do most political conservatives fit neatly into this definition list. We do indeed want to restore the institutions of liberty and limit further changes to those institutions. So in the strictest sense, it’s accurate. But we also recognize we’re a LONG way from our founding, and we’re not terribly fond of the current establishment on either side of the aisle.
Thankfully, about seven years ago, conservatives from across the country gathered together in countless groups across this nation. They sat down and worked together to define some basics of what it meant to be conservative. The core principles from which policy issues flows. The core principles upon which worldviews are formed. And the core values that conservatives hold dear. This is, of course, not a definitive definition. Not every person who is conservative signed off on them. But, they do tend to encompass the majority of the ideals that conservatives support. It’s time for a refresher.
From Contract From America (to foundation, for details on policy go here):

We, the undersigned, call upon those seeking to represent us in public office to sign the Contract from America and by doing so commit to support each of its agenda items, work to bring each agenda item to a vote until all items are passed, and pledge to advocate on behalf of individual liberty, limited government, and economic freedom.

Our moral, political, and economic liberties are inherent, not granted by our government. It is essential to the practice of these liberties that we be free from restriction over our peaceful political expression and free from excessive control over our economic choices.

The purpose of our government is to exercise only those limited powers that have been relinquished to it by the people — chief among these being the protection of our liberties by administering justice and ensuring our safety from threats arising inside or outside our country’s sovereign borders. When our government ventures beyond these functions and attempts to increase its power over the marketplace and the economic decisions of individuals, our liberties are diminished and the probability of corruption, internal strife, economic depression, and poverty increases.

The most powerful, proven instrument of material and social progress is the free market. The market economy, driven by the accumulated expressions of individual economic choices, is the only economic system that preserves and enhances individual liberty. Any other economic system, regardless of its intended pragmatic benefits, undermines our fundamental rights as free people.

In reading those things again tonight, this gives a pretty clear picture of what a conservative looks like. Threats to sue people who disagree with him. Praise for tax-payer funding of an organization that performs abortion and undermines the role of parents and marriage. I do also keep coming back to that reverence and honesty thing. Moderation? Humility? Thrift? I suppose if we are willing to accept that Caitlyn is indeed a girl, we should also probably accept that Mr. Trump is conservative. Then again, if like me, you believe that you are what you are no matter what you call yourself, maybe it is time to remember what conservative means.

Be blessed and be a blessing, and happy voting.