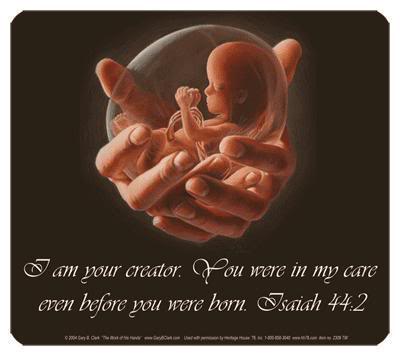 I ran across an article last week that I pushed to the side, knowing I should write about what struck me in it, but at the same time, being somewhat gratefully distracted by the dog and pony show we call the primary election season. Don’t get me wrong, politics is important, especially right now. But, at the same time, this has more to do with why politics is important. The article I read consisted primarily of videos. Four to be exact. And it wasn’t the videos that really bothered me, it was how the story began, and the comment that it was posted with on a friend’s Facebook feed. The beginning of the story read:

Editors Note: Some readers might find this story disturbing

Well, yeah. Given that it is a series of videos that describes, with animated illustration, in a very straightforward clinical fashion, what happens during the various forms of abortion. It was an enlightening, and heart-rending, look at what nearly 1,000,000 women do to themselves and their children every year. I can understand why people would find it disturbing, they should.

At the same time, it got me to thinking about the state of our minds today, when we feel the need for our news to be prefaced with warnings that such a thing, a factual, animated rather than an actual, account of what nearly half the country seems to view as a simple medical procedure that is not at all wrong. A time when we feel the need to admonish our friends who are trying to draw attention to this reality not to post pictures of abortion because we are sick of them, or they offend our sensibilities. A time when people can go on the news and social media and rant at a national magazine because they made a baby in the womb look like, well, a baby. It got me to thinking about the things we find offensive.

So, I went looking. Did you know that in one listing Law & Order Special Victims Unit makes the top 50 watched TV broadcasts for 2015? This show, though only in 50th place is in its 17th season of broadcasting across our airwaves. I mention it specifically because, while there are several other crime shows that are much higher on that list, that also show graphic violence, blood, guts, and medical examiners cutting up dead bodies, this one is a little more relevant to this particular argument. This one is specifically focused on crimes against women and children, often showing horrific crimes against children.

Criminal Minds, another crime show that doesn’t actually typically show autposies that I recall, comes in at number 10. While it doesn’t show dead bodies getting cut up, it often shows recreations of the actual crimes committed, often against young children. It does, after all, deal with profiling and catching the most deviant of deviants. Psychopaths, sociopaths, pedophiles and series rapists and murderers being among the normal fare. But, in the process of telling the story, viewers voluntarily crawl inside the minds, through visual presentation, of these crazed killers.

The top cable shows of the year is another descent into darkness. Behind Empire which I know nothing about personally, but have heard not so great things about its morals from friends, Game of Thrones takes the number two spot. From all accounts, aside from setting the churches America atwitter as pastors claimed it as decadent but ultimately harmless fun, this show is essentially a historically styled fantasy fiction. Replete with incest, fratricide, and apparently the final straw for many of the fans, actual rape in one scene instead of just implied rape.

Coming in a number six, a steep drop from previous years from what I gather, the Walking Dead came back to delight fans with the frantic chopping and shooting of zombies. All with the ever present threat that if you were to die, you needed to make sure your friends, or your children would take you down when you surely rose again a ravening beast intent on killing every non-zombie you could get your hands on. Or the possibility that you might be faced with the responsibility of offing your offspring when the little ankle-biters rose from the dead.

Against this backdrop of what we put into our heads as entertainment (and I will admit to a fondness for Criminal Minds and several of the CBS crime dramas) we wring our hands and flutter our eyes in a near faint because someone dared to interrupt our day with a presentation of facts on abortion. Why is that? Why will we willingly, happily look at blood, guts, gore and violence, even against children, in our choices of entertainment? But when it comes to looking at the reality of what occurs when we allow people “choose” it’s too much for us to bear and other people should really have enough courtesy to not post such things on Facebook or report them in the news?

There are a lot of people today who are angry at our politicians and our news media because they refuse to call terrorism terrorism. There is an outcry among the people that they are weary of politically expedient euphemisms covering over the evil that people do. I deeply agree with that sentiment. What I want to know is why is it that we cry for the light when it comes to terrorists, but love the dark when it comes to the murder of children?

I encourage each of you reading this to take time to watch every one of the videos below, and share it, boldly and without apology, with as many people as you can. What good are elections if we don’t remember why it is not a good thing to praise Planned Parenthood on national TV? What good is praying for blessings when we ignore a sin of this magnitude in our nation, and instead close our eyes? It is time for the darkness to be brought into the light.

One thought on “Revelations – Loving the Dark”