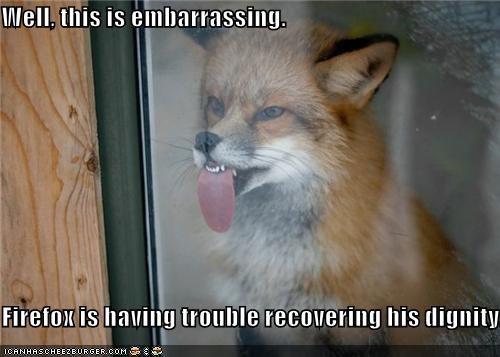 The web exploded the last few weeks. Apparently, there is at least one person in Silicon Valley who supports traditional marriage and put his money where his heart is. Apparently, that is not allowed. The opponents of traditional marriage are running their victory laps today after their outcry precipitated the resignation of Brendan Eich, CEO of Mozilla. The Christians I have seen are shaking their fists in outrage and decrying the leftist mob. I understand the outrage, but there are two troubling trends in the Christian narrative. First, we have the cry for Christians to push back and stop being cowards. Second, we have the idea that we should be afraid.

I will address the fear issue simply by pointing to Matthew 10:26-28. This is my favorite reminder of the sinful nature of fear of the world. If you prefer another, Biblegateway has a great search function. God led me instead to address the notion that Mr. Eich has somehow been defeated or cowardly in this encounter. I want to begin this with a couple of basic facts that many may not know.

I do not know if Mr. Eich is a Christian. This is what we do know on that score:

This set of facts tells me Mr. Eich is a man who abides by his principles. It tells me he honestly expected his record of fair dealings at Mozilla to withstand the media splash, as it had before. It tells me that something happened in him from one day to the next that brought about a change of heart.

The other things we can glean about Mr. Eich with a little research is that he was not simply the CEO of Mozilla.

As I contemplate these facts, I wonder about my fellow Christians’ calls to push back against the attacks on our conscience. Do we really understand what that will look like? I think it probably looks a lot like Mr. Eich stepping down from his position.

I do not know if Mr. Eich is a Christian. If he is, I can imagine what the night between his interview and his resignation looked like. It would have been filled with prayer for direction. He would have wrestled with the love he has for a company he helped build from the ground up. He would have wrestled with the benefits of having a prominent job in a field where he has an obvious talent. These things would have been stacked against the stark reality that his efforts were going to an organization whose principles were not simply open, but had actually become anti-God. What would your response be?

For me, faced with that situation, the words of Paul come to mind. “Let the word of Christ dwell in you richly, teaching and admonishing one another in all wisdom, singing psalms and hymns and spiritual songs, with thankfulness in your hearts to God.  And whatever you do, in word or deed, do everything in the name of the Lord Jesus, giving thanks to God the Father through him.” (Colossian 3:16-17 ESV)

In light of that my fellow Christians, I ask you to consider the true situation faced by those now crowing with delight at the defeat of the CEO. Mozilla, and its whole community of programmers, designers, and users, have lost the talents of one of the most brilliant minds in the industry. They have lost the talents of one of the men that gave Mozilla the means to challenge the likes of Bill Gates and Microsoft in the search engine market, and win. They have also alienated a large portion of their market that will not likely return. Who really lost this battle?

More importantly, where does Mr. Eich’s decision lead the rest of us? We cry out for a push back against the godless in our society. Are you ready? Will you take the time to look deeply at the principles of all the companies you work for, all the products you purchase, all the entertainment you consume? If you find in them not simple neutrality but actual anti-God principles, will you have the courage to walk away and use your time, talents and resources in a place where you can bring glory to God? Imagine what that would look like. We can only accomplish that if we start to see what victory costs and move forward unafraid.

2 Replies to “Brendan Eich – Mozilla vs The King”

Genesis 3:20-24 For use on computer you can just click the audio players below. For use on cellphone or tablet, please click the link to the desired version. English Standard Version Link ESV New International Version Link NIV King James Version Link KJV The Bible for Everyone (John Goldingay and Tom Wright) Link BE Visit […]

Genesis 3:17-20 For use on computer you can just click the audio players below. For use on cellphone or tablet, please click the link to the desired version. English Standard Version Link ESV New International Version Link NIV King James Version Link KJV The Bible for Everyone (John Goldingay and Tom Wright) Link BE Visit […]

Genesis 3:12-16 For use on computer you can just click the audio players below. For use on cellphone or tablet, please click the link to the desired version. English Standard Version Link ESV New International Version Link NIV King James Version Link KJV The Bible for Everyone (John Goldingay and Tom Wright) Link BE Visit […]